How to get to the campsite Larrouleta in the Basque Country

- By car: from the northern half of France, all the routes leading to the campsite Larrouleta in Urrugne take you through
Bordeaux.
At the height of Bordeaux, whether you come from Strasbourg, Lyon, Paris, or Nantes, it will be necessary to fork on the A63 motorway towards Bayonne and Hendaye.
If you come from the south-east, take the A64 motorway at the level of Toulouse towards Bayonne then join the A63 to Saint-Jean-de-Luz.
From Spain, you will go back to Urrugne via Pamplona or via Bilbao.

By the D810:
- From the North, after crossing St Jean de Luz, follow the direction "Urrugne, Hendaye". Drive 3 km and turn on the first road on the right (Socoa road) after the entrance to the motorway.

- Coming from the South, follow the direction Saint Jean de Luz. After passing the roundabout in the village of Urrugne, drive 1 km and turn left (Socoa road)

The nearest train station, accessible by bus on line 816 (Larrouleta stop in front of the campsite), is Saint-Jean-de-Saint-Jean.

Luz. It is served by the TER lines connecting Bordeaux, Hendaye and Dax, and by TGV from Paris-Montparnasse.

Stop at St Jean de Luz-Ciboure station and then take bus line 816 in the direction of hendaye opposite the bus station. Get off at the stop "Larrouleta".

By plane: the Biarritz-Pays-Basque airport is less than 20 km from the campsite Larrouleta, and accessible by bus network. Line 816 travels without changing from the airport to the campsite, via Saint-Jean-de-Luz. 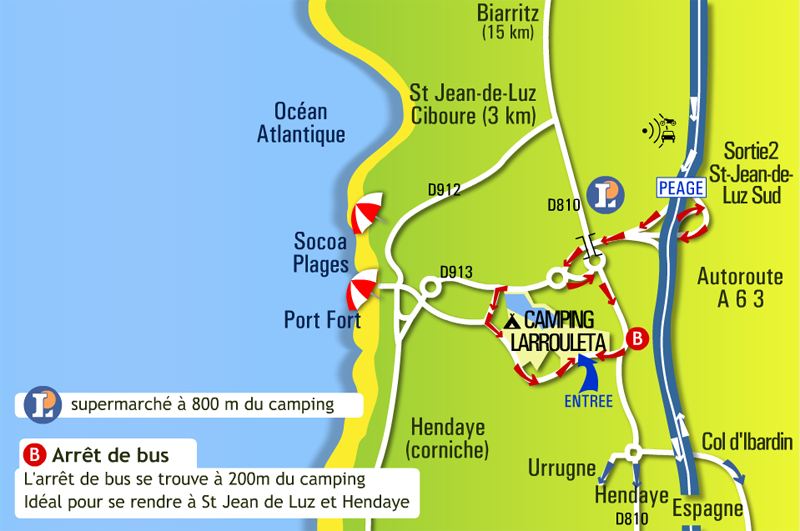 View a larger map with OSM
Go to Google Maps "
Reservation
Le Camping en Vidéo
News
Campsite open all year The entire Larrouleta team would like to thank you for the summer season that has just passed. We would like to remind you that we are open all year long ant that it would be a pleasure to welcome you. See more
View all News
Downloads
Brochure
Assurance annulation
Camping map
Environmental policy